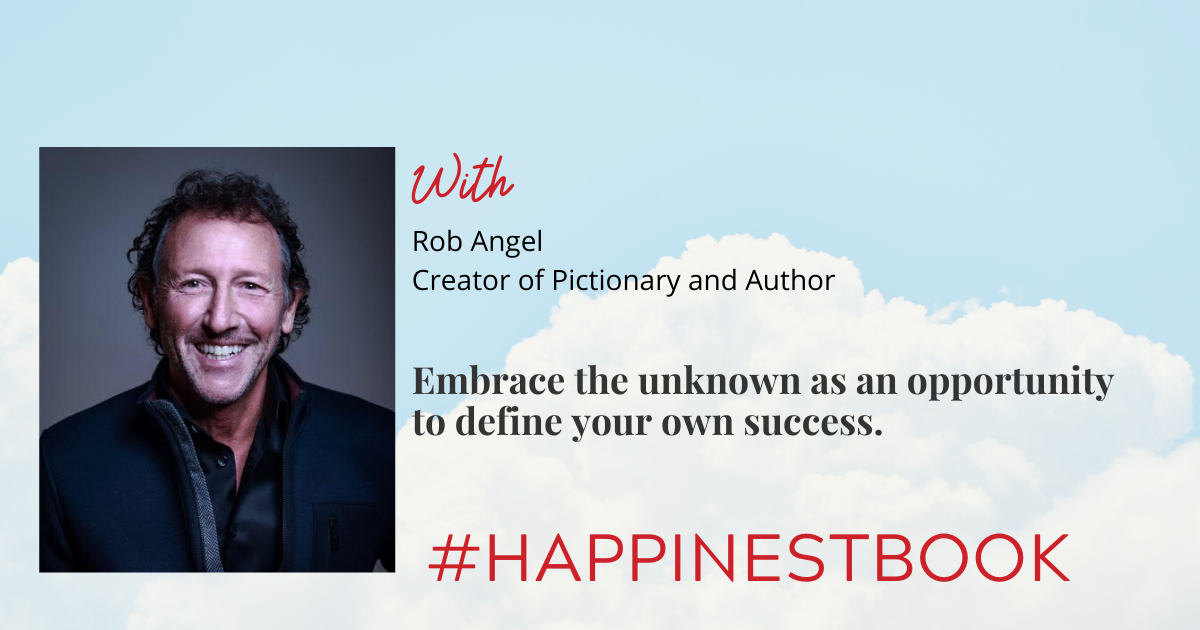 Rob Angel was a 26-year-old waiter from Seattle, when he picked up a No. 2 pencil, yellow legal pad and Webster’s paperback dictionary to create the bestselling board game Pictionary, which has sold more than 38 million copies worldwide. Putting together the first 1,000 games in his apartment, he parlayed an idea into a global powerhouse: Pictionary is now distributed in 60 countries in 45 languages. Rob tells  his story in a new book— Game Changer: The Story of Pictionary and How I Turned a Simple Idea into the Bestselling Board Game in the World. Rob is also involved in philanthropy and encourages aspiring entrepreneurs to “find their aardvark,” a reference to the first Pictionary word he jotted down after beating back self-doubt and mustering the confidence to begin. Rob shows others how to be fun-loving, boundary-busting and creative. Check out Robangel.com.

If you like what you hear, I’d really appreciate it if you would subscribe, rate and review the show. It’s easy to do on Apple Podcasts, or you can go directly to the podcast section of my website at judyhollandauthor.com.

Here’s what you’ll learn about in this episode:
• Creativity will grow out of the downtime during the pandemic.
• Have an open mind to new ideas. If you have a good idea, run with it! It’s all about getting started.
• Rob and his roommates sketched words from the dictionary like charades on paper. He saw his idea of creating a game as “something that needed to be done.”
• He didn’t have a vision of creating a masterpiece. He aimed to create a game that other people would enjoy.
• Everybody has a good idea, novel or game in them. But most can’t get started.
• For two years, self-doubt plagued Rob and he self-sabotaged. Finally, he put himself in “time out,” went into the backyard and started a word list. The first word he wrote was Aardvark. Then he wrote another. That’s how he built momentum. He tells others to find their version of that first word, their Aardvark.
• Rob first sold Pictionary by being scrappy. He asked a real estate company to put games on the counter of homes it was selling. Then he drove to Seattle area stores that sold furniture, knickknacks and clothing and asked them to sell Pictionary. It was “totally homegrown.”
• He held to his vision of creating a great game, fending off many suggestions to alter it. Rob says if he had started with the goal of making money, he’d still be waiting tables. “In business, as in life, if you take care of yourself, the benefits will come. Just make sure you are doing what’s right for you.”
• During the coronavirus crisis, we are being forced to slow down, which will lead to us becoming more creative. People are helping each other. Hopefully, that will become the new normal. “It’s going to be a fascinating, interesting dynamic when we get out of here.”
• Just get started. Keep it fun and eliminate the fear. Open up your mind, heart, soul and spirit and just see what comes out. You’ll be amazed!